Many believe that certain things played important roles to make the coming year a bountiful one. Traditionally, you should have them prepared on New Year’s Eve in order for good luck to ride with you the following year — these include what color to wear, lighting of fire crackers which many believe will drive away bad elements, and specific types food to set on the table.

These food rituals which originated from various cultures symbolize and attract abundance at the stroke of midnight. Here’s a list of foods you can prepare on New Year’s Eve with family and friends to bring about forward movement, prosperity and good health.

1. Round Fruits And Ring-Shaped Foods

12 round fruits on New Year’s Eve are from the influence of Chinese people. They believed that they will attract good fortune all year round since 12 fruits stand for 12 months and round shape resembles that of the coin.

As the church bell rings twelve times at midnight, it is customary to greet each other and eat the 12 fruits with the belief that you will have a fruitful year coming.

Ring-shaped foods for New Year are a worldwide tradition because they symbolize “coming full circle”, thus prosperity will be with the household throughout the New Year.

This fruit corresponds to stroke of luck in Turkey for many reasons. Their blood-red color represents the heart — symbolizing life and fertility — their seeds for prosperity, and it generally brings good health because of its medicinal benefits.

Eating long noodles in New Year’s Eve is a popular custom among Chinese and other Asians. They should remain unbroken and not shortened during cooking in order to secure longevity or long life, so the longer they are, the better.
This is also Japan’s most love food on the midnight of December 31st, as they call it “toshi-koshi soba” meaning from one year to another. 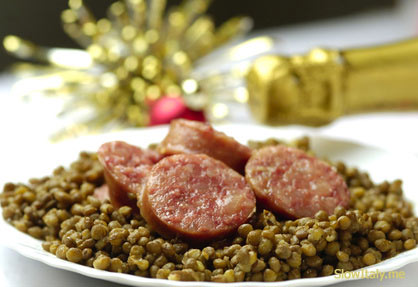 Green lentils with sausage are Italians famous dish on January 1st. It resembles money because of its coin-like appearance and as the legumes plump in water during cooking, they believe will bring them increasing wealth. Italians enjoy this dish as they wish each other “Buon Anno”- Happy New Year.

In Southern United States to Europe, any greens are considered lucky because they look like money. They believe the more you eat, the more money you will have. So they will eventually fill their tummies with these greens on New Year’s Eve.

It is customary to eat rice pudding in Sweden and Norway to celebrate New Year. They usually hide an almond in the pudding and whoever finds it is believed to have a prosperous life the next year.

These peas are also popular in Southern United States for they show humility and good fortune. They are traditionally served in a dish called “Hoppin’ John” also known as Carolina Peas and Rice, during New Year’s Day to bring good luck. On the day after New Year, when leftover “Hoppin’ John” is served, it is called “Skippin’ Jenny” which suppose will provide them a hope of prosperous year.

Grapes actually are circular fruits which some merrymakers in Spain enjoy to eat at the stroke of midnight. They usually thread a dozen of grapes in a skewer before the countdown and serve each in a glass of champagne. Each sweet grape represents an excellent month while the sour one is for the not-so-lucky month.

“Vasilopita” is famous sweet bread or cake in Greece which they put a coin inside before baking. They celebrate the New Year by having fun in finding the coin as they eat the bread and whoever finds it will eventually have a good life in the coming year.

According to tradition in the Southern part of United States, cornbread will complete the New Year’s feast. They say it symbolizes gold that will bring riches in the year to come.

Whether you will be fortunate the following year or not, nobody knows for certain. But one things for sure, you will have a hearty celebration and a full belly on New Year’s Eve with food, wine, music, family and friends.